n testing vision, eye doctors employ a time-honored reference to measure visual acuity. The Snellen chart, with progressively smaller letters, has become almost universal. “20/20” means that the person being tested can see the same letters on the chart, viewed from 20 feet, as a theoretically normal eye can see from 20 feet. “20/80” means the eye sees at 20 feet what a normal eye sees at 80 feet. In Europe (where the metric system is used), 20 feet corresponds to 6 meters, so normal vision is noted as 6/6. 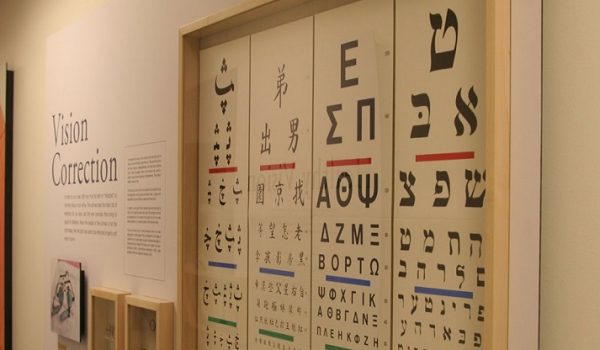 Technically, acuity of “20/20” corresponds to an angular resolution of 1 degree. Vision of at least 20/40 is required in California and most states to obtain a drivers’ license. Legal blindness, by contrast, means that a person’s best-corrected vision is 20/400 or worse.

Snellen charts, with black letters on a white background, measure high contrast visual acuity. They do not measure ability to distinguish subtle differences in shades of gray. Other tests are necessary for this purpose.

One increasingly accepted method of measuring contrast sensitivity requires special charts and controlled lighting. Shown at left is a one of the Pelli-Robson testing charts. There are people who have very good Snellen acuity, yet describe poor quality of vision — unease at dusk, at night, and/or in particular lighting conditions. When tested, these people can be found to have decreased performance on contrast sensitivity testing. Some people have decreased scores on these tests after laser corrective surgery.

Your Eyeglass Prescription
Optical prescriptions are written to specify sphere power, cylinder power, and axis of cylindrical correction (on a protractor scale, 0 to 180 degrees). By custom, myopia is written as minus (-) sphere, and hyperopia as plus (+) sphere. Optical power of a lens is measured in units called diopters. For the science-minded, 1 diopter is the amount of focusing power needed to bring parallel light rays into focus 1 meter behind the lens. To simplify, we are leaving out discussion of multifocal lenses (e.g. bifocals, trifocals, etc.) and prism in glasses.

If you don’t know your prescription but want an estimate, take your glasses off, hold them up, and look through the lenses one at a time. If the lens makes things look smaller, it is concave (myopia correcting). If things through the lens look bigger, it is convex (farsighted correcting). To see whether the lens has any astigmatism correction, rotate it while looking through. If things look particularly compressed or ‘squished’ in one direction, and that direction follows the rotation of the glasses, then there is a cylindrical power to the lens and you have astigmatism.